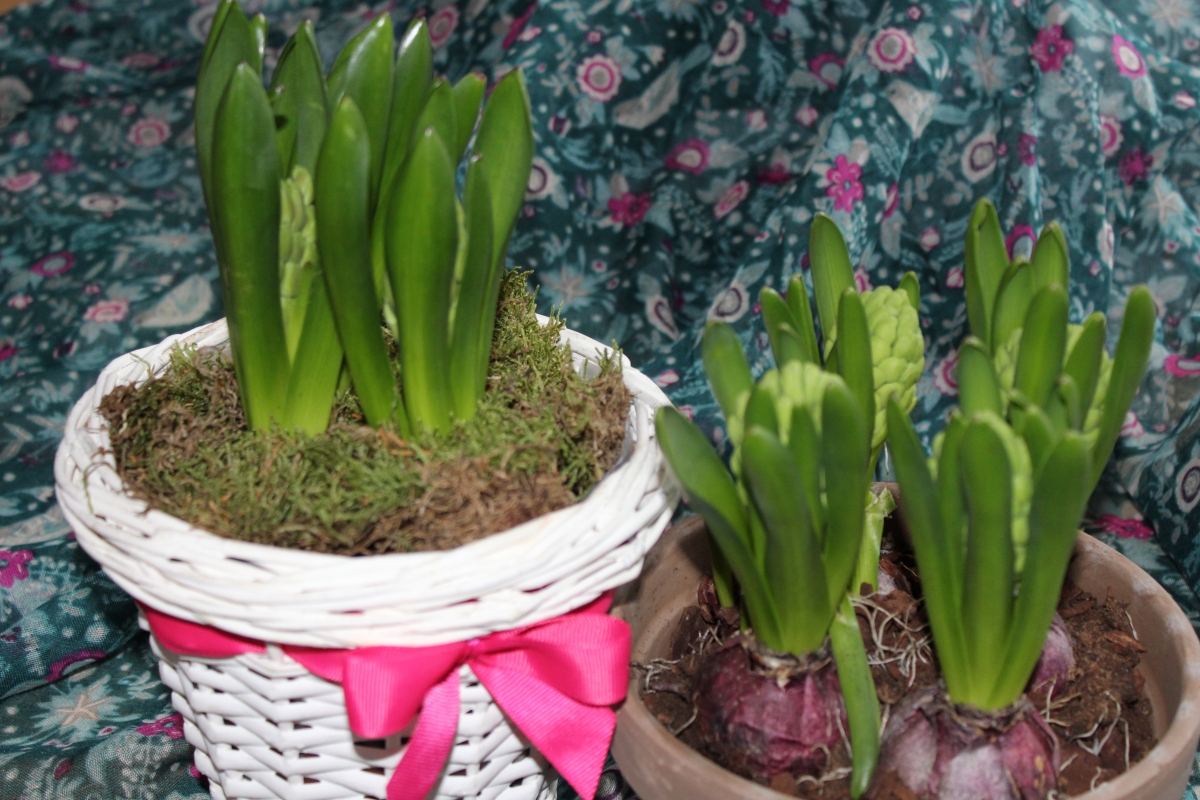 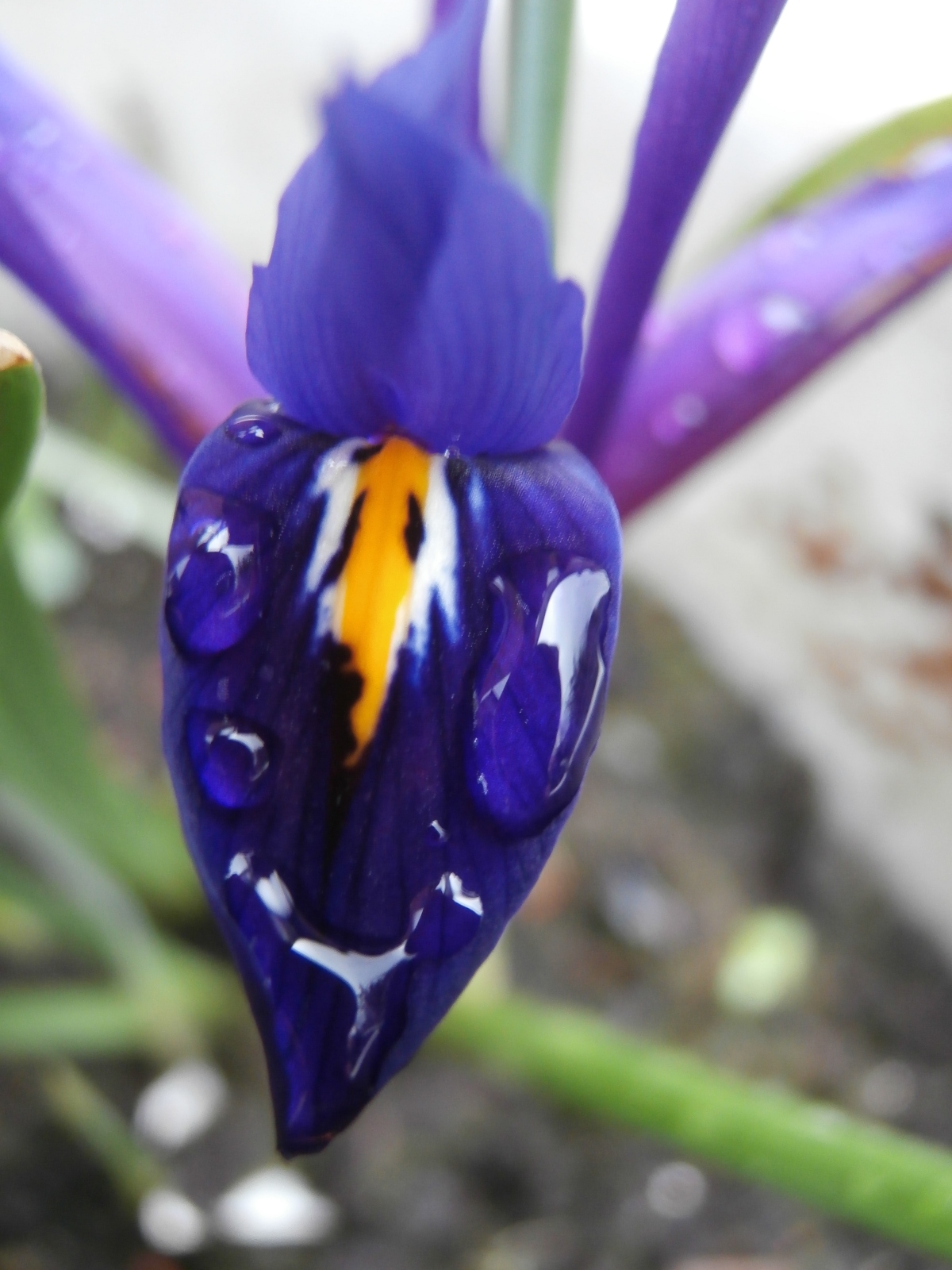 These seemed to spring from nowhere almost overnight. A wonderful surprise to find them in the old sink they share with miniature daffodils.

I find them difficult to photograph though: they have an unusual shape. And that intense blue… 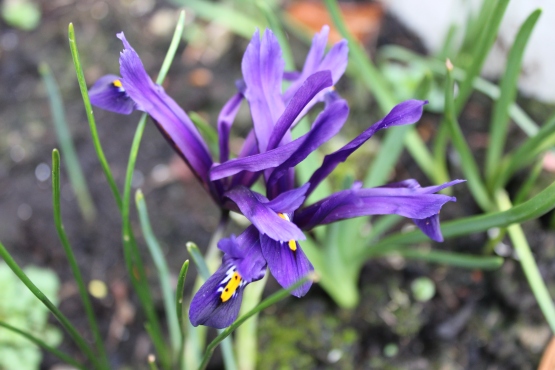 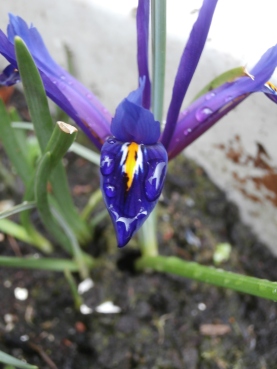 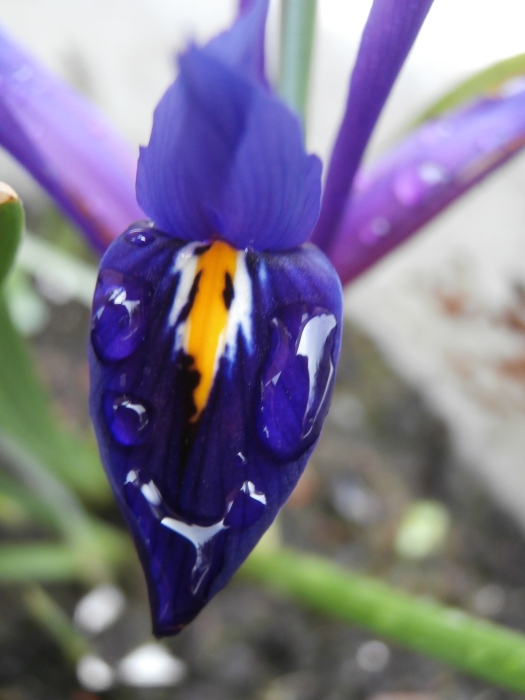 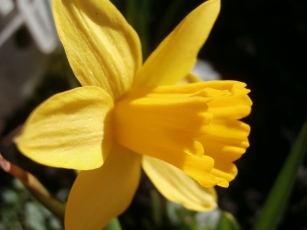 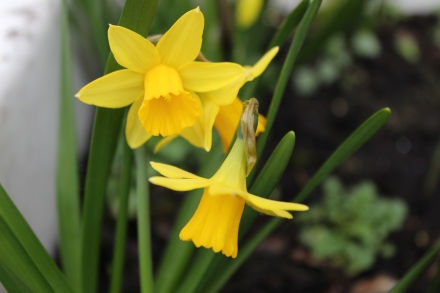 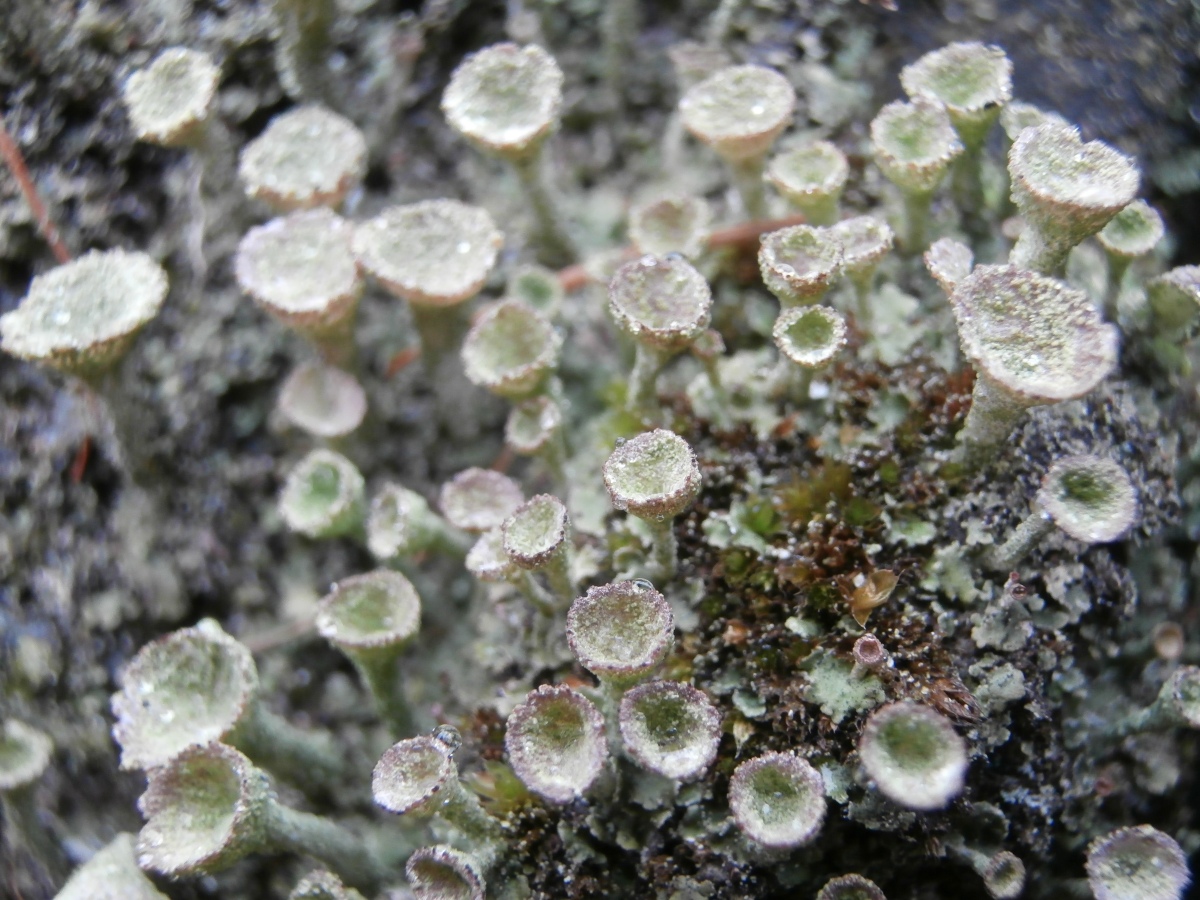 I was just trying to take a few photographs of some lichen I’d found on a wall next to a gate. Like I do these days.

The excitement of my discovery was obvious in my voice; my husband clearly wanted to get back in the car and drive off.

“Also known as pixie cups, I believe!” I said, with mock glee.  I’ve only just found out what they’re called, to be honest, and I’m not even sure now.  I just like them.

As if summoned by the pixies themselves, three trail bikes appeared, their riders clad in multicoloured leather, identities hidden by gleaming visors.  They nudged through the gate with their front wheels, filling the air with the guttural growl of their engines. I looked the other way.

As they roared up the hill, I approached my hunting ground again, angling for that extra, perfect shot. My husband resumed the pixie cup conversation:

“What did you say they were called?”  As I turned, I caught the flicker of a fleeting smirk on his face. I suddenly realised that just before the bikers arrived I had been leaning crazily with my nose two inches from a wall, pontificating about pixie cups. Interesting behaviour.

Let’s face it: they couldn’t have heard me, they wouldn’t have cared and neither did I.  But it was one of the those rare moments when I could see myself as others might see me.

I couldn’t help thinking of these lines by Robert Burns:

‘O wad some Power the giftie gie us
To see oursels as ithers see us!’

I did get some pictures of the lichen though!

Bought some pansies to plant out yesterday.  I needed to add some colour to the garden – quickly.

There are other signs of life too! 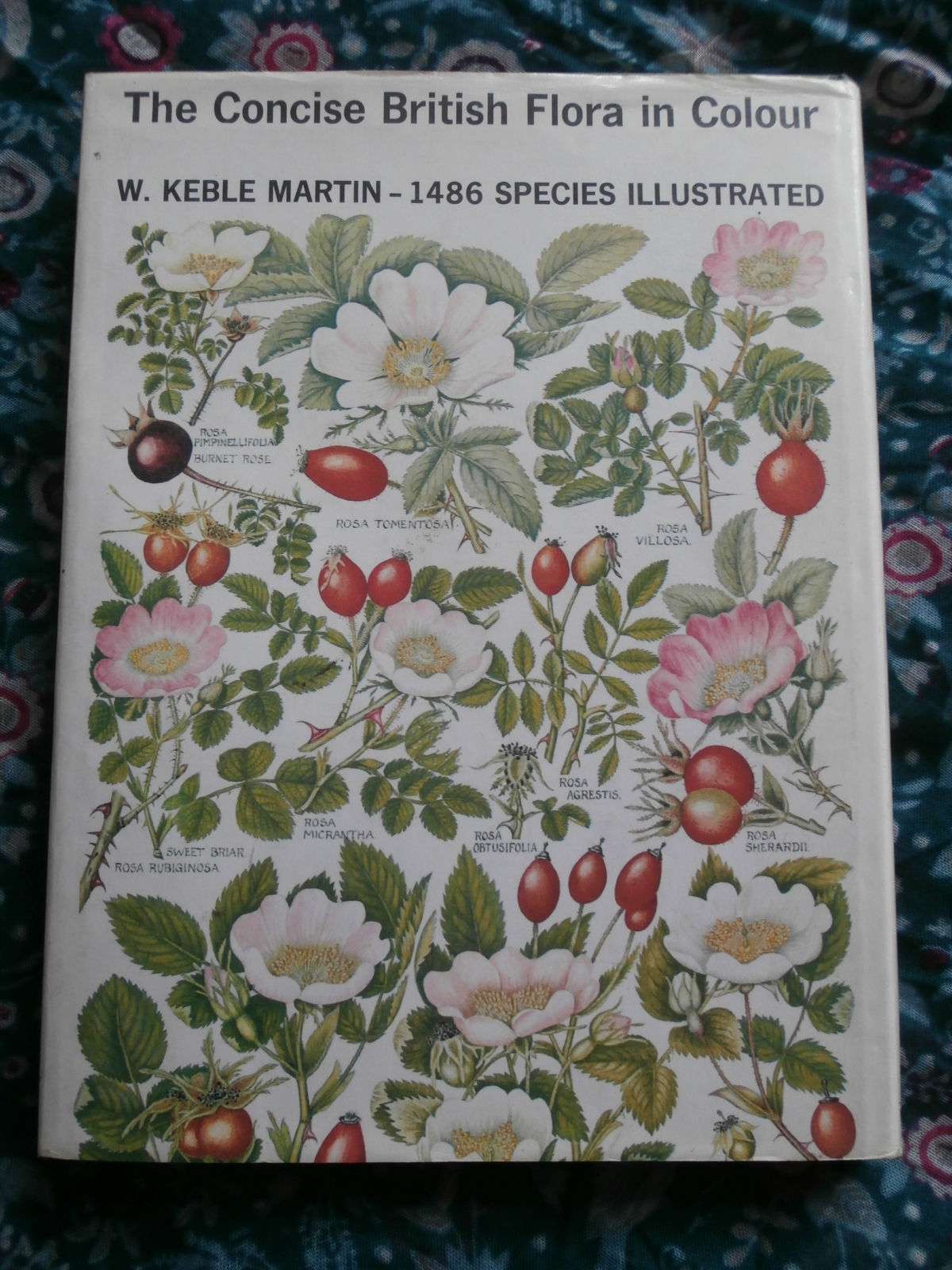 Added to the gardening bookshelf: ‘The Concise British Flora in Colour’ by W. Keble Martin. As a young child, I could only aspire to owning my own copy of this beautifully illustrated book. My mum borrowed it from the library to help me identify a flower I’d seen while on holiday in the Lake District. It provided me with the answer; I was hooked! So it was impossible to resist when I spotted that unmistakable white, green and pink cover in a bargain box outside a shop in Hay-on-Wye. I had to rescue it. For only £1, I turned a childhood dream into reality!

When originally published in 1965, ‘The Concise British Flora in Colour’ cost 35s. (Incidentally, the name stamped inside my 1965 copy tells me it was owned by a doctor from Powys, Wales). The book represents sixty years of work by the Reverend William Keble Martin, who was born in 1877 and studied Botany at Oxford. Later, he worked as a Curate or Vicar in various parishes in northern England, including Wath-upon-Dearne, where today there is a street named after him. After returning in 1918 from France, where he had been Chaplain to the Forces, he lived and worked in Devon, continuing his work on flowers. There’s a charming insight into his life at that time on the back flap of the dust jacket:

‘After a busy Sunday he would catch a late train, sometimes travelling as far afield as Scotland, and following his explorations some of the flowers he had found would often be drawn in the train on the return journey on Thursday.”

I love the illustrations: the way the plants appear to be growing round and overlapping each other, yet remaining clear and easily identifiable. Some of my favourites:

In 1967, four postage stamps designed by W Keble Martin were issued by the Royal Mail.  As soon as I discovered this, it immediately brought to mind my chaotic, childish stamp album – not opened for many a year – and here they are! 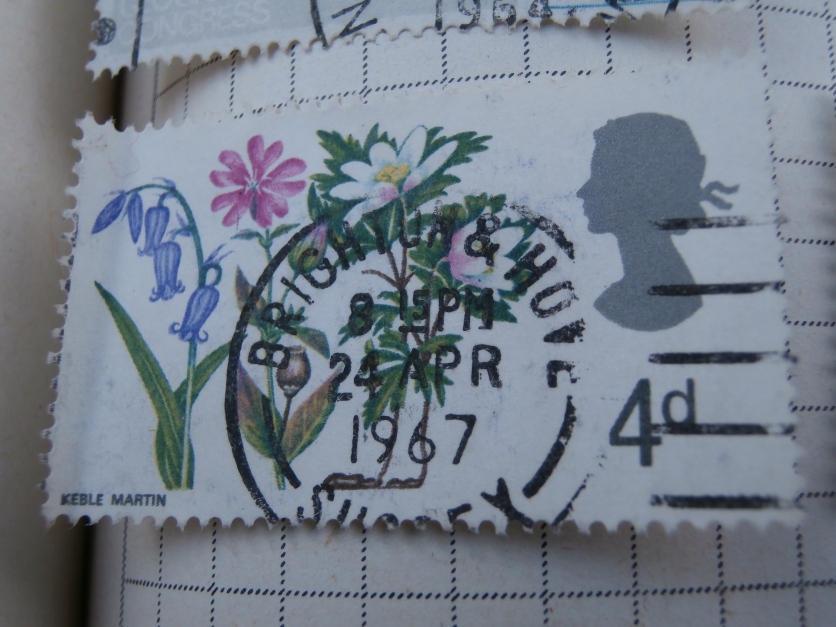 Writing this has brought back a powerful childhood memory.  Magical and lost … until now. It’s the reason this wonderful book is now propped up next to my screen as I’m writing.  A holiday in the Lakes.  A particular flower, a particular place, a particular time.  But probably another post…

The snowdrops in the garden are probably at their best now.  At least for the bees. I’m surprised to see bees so early in the year; I’d certainly never seen them on snowdrops before, although I’d probably never looked…

So there I was, lying in some mud, trying to get an adequate photo of the snowdrops when I heard a whining, solitary buzz. A bee – with very orange kneecaps! * 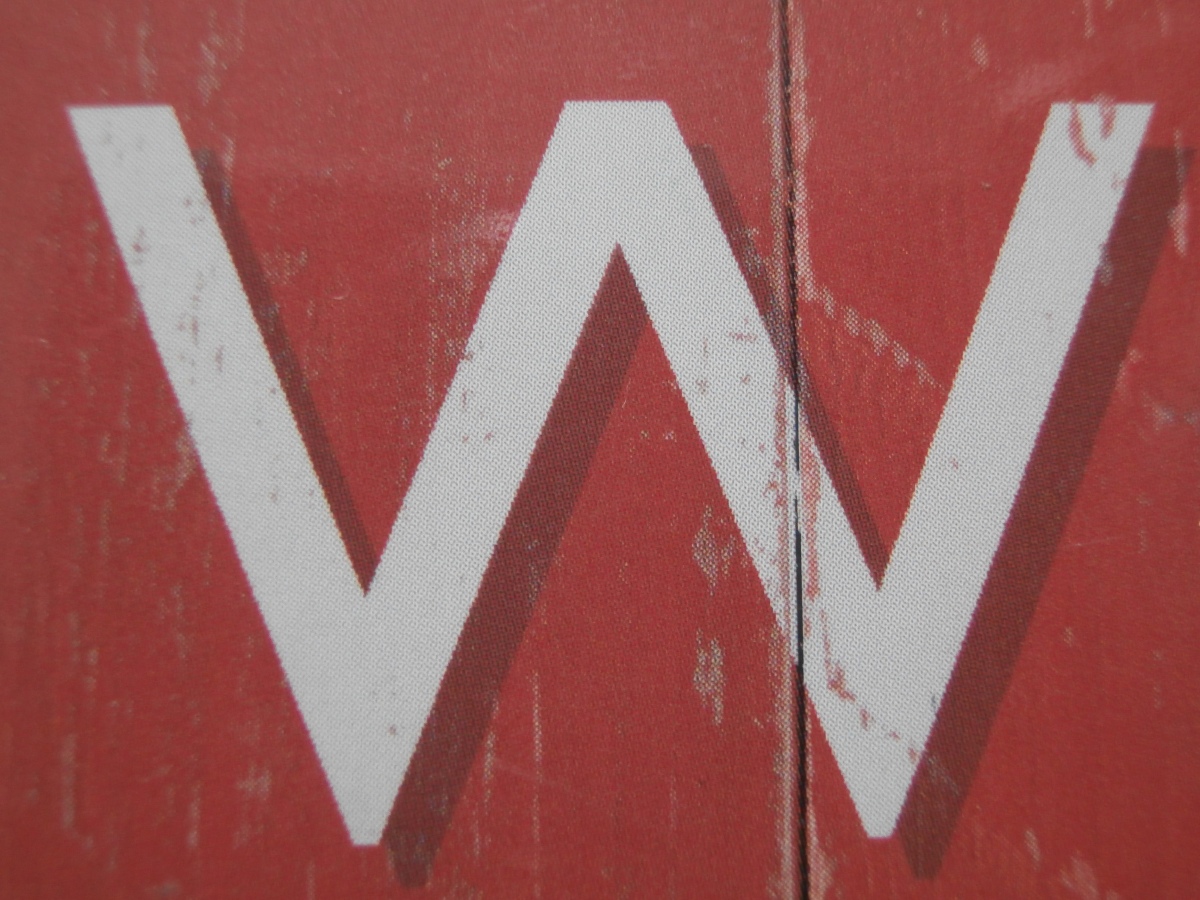 I finished reading ‘Wolf Hall’ and ‘Bring Up the Bodies’ by Hilary Mantel in time for the final episode of the wonderful BBC adaptation. I’ll miss them. There are images in my mind now (from both books and television) that will take a long time to fade. As always, I’m glad I read the books first. I felt so involved in the world they created, but that takes nothing away from the excellence of the BBC version.

The third book is desperately needed!

Unusual #flowers
Pancakes at our house today! Lemon juice and sugar best for me. What do you think? #pancakeday #shrovetuesday #pancakes
At a farm... #animals #farmanimals #sheep 🐑
Lovely to see some tulips in the shops! #flowers #tulips 🌷
Out for a coffee... #glass #coffeetime #happynewyear
Still flowering - just! #flowers #gladiolus #garden